First of all, as a french student doing an internship in Australia, the funds were directly used as a support help for the flight tickets.

Due to the unknown movements of the ankle and the knee when a person is running on uneven surface like soft and hard sand which cause injuries during beach sport in Australia. This project has the objective to propose some hypotheses and an assessment of the dynamism of ankle and knee.
By sand stiffness study, we were expected to know better the mechanical characteristics of sand and then could explain difference of movement of ankle and knee. At least, we know that hard sand’s stiffness is sixteen times higher than on soft sand. This difference is mainly due to the fact that soft sand is an uncompacted surface.

Then the assessment of dynamism of the ankle and the knee lead to the first conclusion that on impact accelerations are much higher on hard sand than on soft sand with mean acceleration 13% higher in average. This concurs with the sand stiffness research. The second analysis of running data was to study, with statistical parameters, the difference of movement of the ankle and the knee. This lead to the conclusion that movement on x-axis and z-axis are lower on the knee than the ankle. This has been shown by a rise by 64% to 153% of the mean acceleration on x-axis of the knee compare to the ankle but also a more balanced dispersion of accelerations values due to skewness generally closer to 0. On z-axis it’s a decrease of mean accelerations by 35% to 127% and also of variance which indicated less dispersion of accelerations values. This leads to underline that impact accelerations during the running are absorbed by leg’s muscles. However for y-axis, statistical parameters show on the contrary more movement of the knee than the ankle. The last analyse was mitigate due to mixed interpretation which jeopardized no sportiest runners on some axis; as on x-axis. But sometimes jeopardized sportiest runner due to important quick movement of his ankle and knee, as on z-axis. However one analyse could be more important and need to be underline, runner 5 is the runner how risk ore for his ankle and knee due to the fact that he is striking more his heel during impact which increase impact acceleration on every axis. 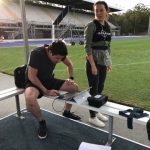 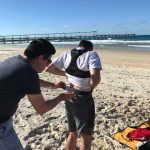 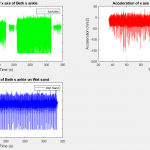 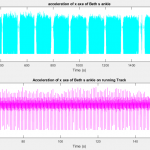