The transistion from a stationary crouch on running-blocks to an erect running position is critical to success in sprint running. This is why we try to find out if we can make a difference in this part. For that, we need to do some measurements on a running track with using IMUs. The fund helped me to do measurements in Japan. I flew to The National Institute of Fitness and Sports in Kanoya, Japan, to do sprinting measurements on a 50m Force plate track. We also used IMUs during this sprints for the project. The three IMUs were on the medial sides of both shank and also one on the T3 upper spine. The purpose was to predict the ground reaction force during a 10m sprint with using IMUs. The measurement were done by three elite sprinters. They repeated five sprints starts on a 50m-long instrumented running track. After the measurements in Japan, we flew to Australia to work with all the collected data. We made lots of graphs to see if the data was consistent enough. We used linear regression analysis to find the coefficients and uses them to predict the ground reaction force.

We found that all the graphs were very consistent and clear. They were also reproducible for all the trails. Because the reproducibility it was possible to make a working model for one of the participants. If we want to make more models, we need more 50m trials from more participants or we can put the sensors on a different part from the body. We made a ISEA paper from all this information. The next thing for me is to see if the paper is getting published and try to think about my next internship. Next year I need to do another internship and that might be also something to do with sport science. 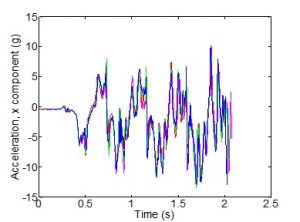 I added an example from the collected raw data from the IMU on the right shank. It’s plotted in a figure by using Matlab. 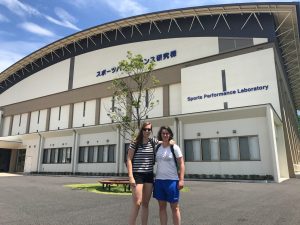