Kinematics and feature negotiating feedback system in a ski cross start and run: a methodological study

As a Msc student in Sport technology at Aalborg University, for my Master thesis project I investigated a method to develop a performance feedback system for ski cross skiers and coaches. My supervisor was Professor Uwe Kersting and the project was in collaboration with the Swedish Ski Cross Team. I want to say thank you to the ISEA for funding this project. The funds were used to cover the travel and living expenses for one month in Are, Sweden.

Three elite skiers of the Swedish Ski Cross Team participated to this study. The equipment was composed by a wearable IMU-based motion capture system to collect the skiers’ kinematic data, and two GNSS sensors to collect the skier’spositioning data along the full ski cross course. The test course included all the features typical of a ski cross run, such as turns, jumps, rollers, banks and negative turns. The mobile sensor was integrated in the back protector and worn by the subjects, and the base sensor was placed at the start. The positioning data from the two sensors were post-processed together to increase the data accuracy by applying the relative positioning technique. The files containing the kinematic data were then converted into c3d files and fused with the files containing the positioning data into a new c3d file in MATLAB. The new c3d file was successively imported in Visual3D, where the kinematic data of interest, i.e. the pelvis-feet distance along the three anatomical axes, and the pelvis and feet trajectory along the whole run were analysed. 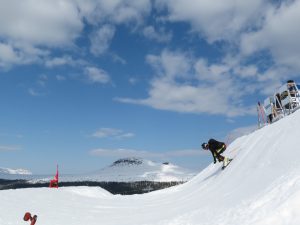 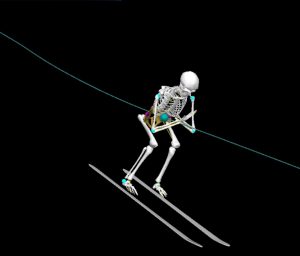