I used the award to help fund a trip to Griffith University, Australia to complete a research project. The project involved using inertial measurement units (IMUs) to collect acceleration data to then predict the ground reaction forces involved in a sprint start.

As part of the project myself and another intern travelled to Australia via Japan. In Japan we had the opportunity to conduct some trials using the facilities there to collect data for the project. We both visited the National Institute of fitness and Sport (NIFS), Kanoya and we able to make use of the instrumented running track and athletes there. Three sprinters completed 10m and 50m sprints over an instrumented running track that collected three dimensional force. The sprinters were also were also wearing IMUs developed by Griffith University on each shank and the T3 vertbrae, which would collect accelerometer, gyroscope and magnetometer data. Me and the other intern were also kindly given a tour of the facilities and the local area by Professor Tomohtito Wada from NIFS.

The project was then continued in Australia where all the data analysis took place. I was working as a part of a group of people wit the aim to to develop a method or algorithm to be able to predict the ground reaction force from the acceleration data from the IMUs. We then had to think about ways of using the acceleration data to get the force. A couple of different methods were tried by various members of the group. The method I worked on was to use a linear combination of the accelerations to create a model that would give an estimation of the force. The result showed potential, for one of the participants a model was created that could reasonably accurately predict the ground reaction force generated.

Completing the project was a really great experience, I really enjoyed working on the project and am happy to have contributed to research in this area, as the project resulted in a paper that is going to be presented at the ISEA 2018 conference. 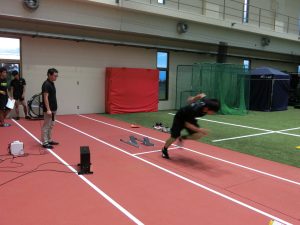