The ISEA Student Engagement Award was used in order to help me subsidise my transport and accommodation costs while participating in a Sports Engineering internship based at Griffith University, Nathan Campus. Having access to the ISEA grant was extremely beneficial for me as it allowed me more financial stability when settling into my role as a sports engineering intern in Australia.

Upon completion of the placement a full report on the analysis on the placement of inertial sensors on the body and their application for monitoring fatigue in boxing was submitted to Griffith University. Our initial hypothesis for the use of the inertial sensor located at thoracic vertebrae 3 (T3) was as follows: 1) The sensor data obtained would be suitable to replace the wrist sensors used in prior studies to measure acceleration, gyration and magnetometer readings 2) Distinguish between a right and left punch being thrown 3) detect fatigue occurring in an athlete and 4) identify when a punch has landed and its attenuation throughout the body. The two participants used were elite level athletes competing at the Gold Coast Commonwealth Games and tests were performed in training involving a fixed wall bag, a trainer using focus pads and sparring sessions
From the study we were able to determine the IMU sensor placed at T3 was indeed suitable for monitoring boxing performance in various scenarios and determining left/right punches was possible along with their corresponding magnitudes. It was deemed the use of the T3 sensor was favourable due to it being place in a less invasive position. However there was less success when monitoring fatigue levels during these trials and the results from the study were inconclusive.

I would like to thank Griffith University and the ISEA for their support throughout my placement the opportunity to study and complete a research project in another country has been a valuable experience for me as I look towards completing my degree. 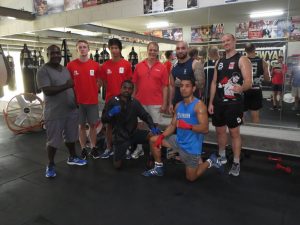